Travis Strikes Again, due to its nature as a celebratory title for the 20th anniversary of Grasshopper’s founding, contained references and cameos from nearly every title in the company’s catalog.
This led to some confusion within the fanbase on what exactly is to be taken as canon and what as a simple homage;
Since my opinion on the matter is completely worthless, I decided to waste my time going through these references in order.

The connection with The 25th Ward, which I consider to be a lot more substantial than the other one-off cameos, is detailed on this page:
How does No More Heroes connect to the other games?

This intro, patched into the game a week after release, created some confusion among players; even the title of the video I just linked to claims that TSA and K7 are “set in the same universe”.

In reality, the setting of Killer7 directly contradicts that of Travis Strikes Again; In the world of Killer7, intercontinental flights have been banned since the late 90s and the majour japanese cities were bombed in the year 2010. In TSA, Travis takes a plane to Tokyo, showing no sign of any of these events transpiring.

What this intro rapresents, is the final chapter of an incomplete short story called “Killer is Dead”. The story remains, for now, untranslated. However, my understanding of it is that KID abruptly ended with Dan Smith on his way to murder Shigeki Birkin aka Badman (the co-protagonist of TSA). Making the TSA intro the direct follow up to its final chapter, and reframing KID as a prologue to the game. (Note that the story was originally meant to take place in the 70s but as far as I know, no dates are mentioned in the actual story. The Badman Strikes Back Visual Novel scenario also calls back to his backstory in Killer is Dead and sets up some of the events in that story.)

What this intro accomplished is injecting the characters of Dan Smith, Shigeki Birkin, Curtis Blackburn and Christopher Mills into the world of No More Heroes, rather than tying the two games together. It remains to be seen if anything will come of this connection; It must be noted that the characters of Dan Smith, Curtis Blackburn and Christopher Mills are still owned by Capcom; therefore, GHM is not free to use those characters without Capcom’s approval, which they had to request during the development of TSA.

Master Taro Gida is a minor character in TSA, appearing in the in-universe magazines as a legendary gaming expert from the 80s. He closely resembles Meijin, another pro-gamer appearing in the Let it Die arcade.

Let it Die takes place past the year 2026, therefore it’s impossible for these two characters to be the same person. It is much more likely, if one wanted to trace a connection, that Meijin merely styles himself after Taro Gida.

This is also a good time to point out that the videogame console used in TSA shares its name with the one featured in Let it Die, the Death Drive, though they are different models.

Akari Tsukiyono shares her name with a character from the manga Kurayami Dance.

There could be a few reasons for this. The two characters look completely different, but that could be explained as a quirk of the artstyle. Both characters are described as being assassins.

Keeping that in mind, they could very well be one and the same person, in which case TSA would have to predate or run concurrent to the event of Kurayami Dance due to the fact that Akari meets her end in that manga.

Another possibility being that Akari Tsukiyono is a similar existance to Kamui Uehara; the Kill the Past universe is no stranger to people sharing names or identities in different parts of the world.

The simplest and most likely explanation would be that it’s a meaningless callback, much like having two characters named Sumio and two little girls called Riru/lil in Moonlight Syndrome and The Silver Case.

It should be noted that Kurayami Dance also has a crossover with No More Heroes; Travis Touchdown apparently taught the protagonist of that manga his assassination techniques.

This one is pretty linear. The pitcher McAllister was the main character of the kinect exclusive game, Diabolical Pitch. Even his backstory is the same one as the one presented in the original, having busted his shoulder while playing. The team mentioned in TSA is different than the one he played in in DP, but that isn’t really a contradiction (it’s not uncommon at all for athletes to perform in many different teams during their careers.)

The only way this makes any sense to me, is if I assume this guy is a surviving member of the Sundance clan that just so happens to resemble Sundance Shot. I honestly can’t think of a reason that the actual Sundance Shot from Flower, Sun and Rain would be working as a fortune teller in Romania. Outside of his role of obligatory cameo.

Mondo Zappa is the main character of the game Killer is Dead (not the short story):

I can’t make heads or tails of his appearence because it seemingly contradicts the timeline of his own game. Mondo is in possession of his mechanical arm in TSA, but during the events of KiD he is under the employment of Bryan’s Execution Agency, rather than the Federal Mimetic Assassination Administration. He is in their employment since he gets the mechanical arm, and his original arm is restored after he cuts ties with the agency.
It makes me wonder if this Mondo Zappa is actually the one from KiD’s original script which was published on The SUDA51 Complete Book (Suda’s original story treatment was altered significantly before release as I detailed in THIS post), the one who supposedly killed Osama Bin Laden. Unfortunately, since the script is still only available in japanese, I can’t actually go and check.

This one is also pretty linear; Juliet Chesterfield is just a stand-in for Juliet Starling from Lollipop Chainsaw, as Suda was unable to contact Warner Brothers to obtain the rights to her character for a cameo. (The chapter she appears in is called Hell’s Chainsaw).

A stand in for John Riccitiello, the CEO of EA at the time of Shadows of the Damned’s development (which was notoriously tampered with by said producers).

Shadows of the Damned:

The game outright explains that Shadows of the Damned is an in-universe videogame which came out, much like real life, in 2011. (Six years before the events of the game.)

So what does this all mean?

As I claimed initially, this abundance of cameos and callbacks has generated a lot of confusion within the fanbase. How seriously are we meant to take these references? Is TSA a sequel to Killer7? Is the plot to Let it Die what ultimately happens in the timeline of this world? Is Mondo Zappa ruling over the moon during the events of Yuki? Or is it all just a celebratory homage to the company’s history?

Personally, I think it’s a bit of both. Outside of The 25th Ward connection (which again, I consider too substantial to be classified as a “cameo”; Kamui Uehara and Midori Midorikawa are also going to return in the upcoming NMH3.), I believe this cavalcade of cameos to be an attempt by Suda to “take back” characters he cared about, which were otherwise stuck in projects that he had little control over. Therefore I don’t believe that games such as Killer is Dead, Lollipop Chainsaw, Diabolical Pitch or Let it Die should be looked at as hard canon yet.
Since Suda doesen’t actually own these intellectual properties (as opposed to Shadows of the Damned, which had a teaser for both a remake and a sequel in TSA) he would have to interact with Kadokawa, Warner Brothers and GungHo if wanted to feature any of their characters again; Not only that, but if his intention was really to connect these games in a definitive matter, he had no reason to make the slight alterations (such as Mondo Zappa’s backstory, Taro Gida being a legendary gamer from the past or Nigel McAllister still having a busted shoulder despite the events of Diabolical Pitch) that make their appearences incongruous.

In short, I believe that the point was to weave slightly different versions of preexisting characters into the No More Heroes series, rather than connecting all these games, much like the first example of Dan Smith.

I reserve the right to be proven wrong by future releases, but for now, I will keep looking at characters like Mondo Zappa as “rebooted” iterations of older characters, rather than the same people crossing over between games. 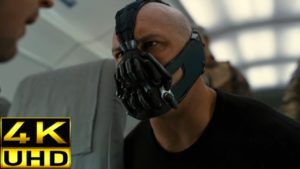 Nobody cared who I was till I put on the mask.
–
Bane

GOD WANTS ME TO WAGE WAR